Prev
Next
Catalogue RMD025
Book 25: Reading up an octave on the Treble (Book 2)

Music printing is believed to have begun around 1465 in Germany, shortly after the Gutenberg Bible. Prior to this time, music had to be copied out by hand. This was a very labour-intensive and time-­consuming process and was usually undertaken only by monks and priests seeking to preserve sacred music for the church.

Later, composers of both sacred and secular music wrote out their music in score and employed copyists to provide them with parts for their singers and instrumentalists to read from. These Part Books, as they became known, contained many unrelated compositions for just one part, eg, Soprano, Alto, etc, for singers, and Cantus, Bassus, etc. for instrumentalists. Many scores and part books from this period are now lost and it is the job of scholars today to write out fresh scores, if all part books are still extant, and to recreate a part in the absence of a part book and score.

Many of today’s publishers, some specialising in early music from the 15th and 16th centuries, accept modem-day arrangements of this music, much of it arranged for recorders. Some arrangers, with a desire to maintain the character and spirit of the original compositions, retain as much of the original music as they can. Thus some parts are written too low for modem recorders to play. Hence the need for players skilled in reading up an octave (usually on the treble) when performing this music.

As far as is known, practice books in reading up an octave don’t exist. For those players who wish to become skilled in reading up an octave on the treble recorder this book provides all that will ever be needed. It presumes no previous knowledge and takes the student from the very earliest stages, by playing tunes with only 4 notes, right up to full sonata movements. Anyone who has played through this book will have no trouble meeting the demands of any published music requiring the player to read up an octave. All the music used in the book comes from the standard repertoire, some familiar, some not. All the pieces are taken from Recorder Practice Books Grades 1 to 8 / Diploma, Descant and Treble.

All notes are to be read, and played, as if they were printed an octave higher:

At the first appearance of a note it will be printed with the stem down in normal size and the octave will appear in brackets, stem up in smaller size, an octave higher: 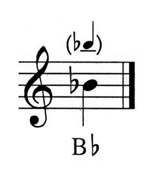 It may help, in the early stages, to name the notes in your head as you play them.

Recorder music for all ages and all stages, sent direct from the publisher. Free postage on all UK shipping.